168 cm
Kim Sungeun (김성은) is a singer, vocal coach and teacher. She was the vocal trainer/mentor for trainees on Produce 101 Season 1.

Kim Sungeun is the CEO of WIP Company, and has been a vocal coach and trainer for many now famous idols. She often works with various agencies to help trainees prepare for debut. She has worked with idols such as BTS, TWICE, and Dalshabet. List of pupils:

She has even been a vocal coach for various television shows, on screen and behind the screen. For example, she was the vocal coach for the soundtrack of Dream High 2, and she was a judge on Kpop Star Hunt.

On top of this, she is a professor of applied vocal music at Dongseoul college and Myongji College. Sungeun is also an established singer in the industry. Sungeun has also sang in the chorus of a lot of artist's songs, such as Son Dambi, Lee Hyori, and many others. 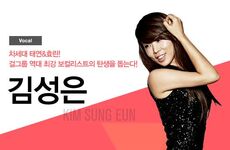 Retrieved from "https://produce-101.fandom.com/wiki/Kim_Sungeun?oldid=31848"
Community content is available under CC-BY-SA unless otherwise noted.